Aikido (jap.: 合気道) is a modern Japanese martial art, developed in the first half of the 20th century. Its founder, Ueshiba Morihei (1883-1969), had previously studied several martial disciplines of the samurai. After having reached mastery in these, he realized that true martial arts always contain an ethical component and should contribute to the personal growth of its practitioners. Because of that he redefined the goal of his martial art: Not the destruction of an enemy but the conclusion of conflict was to be the main goal.

Following Ueshibas ideas, it can never be fruitful to answer an attack with a counter-attack. That is because violence always creates further violence and in this way, a conflict ends in a vicious circle. To break out of this, an Aikidoka should take over responsibility not only for oneself, but on top of that also for the attacker and leave him unharmed from the confrontation.

This is an ambitious goal and a burning issue especially nowadays. But words alone don’t help. On the mat this has to be practiced with the body. That happens by not blocking an attack but deflecting the energy of the attack, taking the balance of the attacker, and finally bringing him under control with a throw or joint lock.

The techniques of Aikido are designed to let us become aware of the actual message of Aikido. They work better if one adapts to the adversary, remains smooth and doesn’t impose ones intention on him but instead creates a joint movement. This is the message of Aikido, that ideally will be transferable to daily life after many hours of sweat on the tatami.

If you are curious and want to try one of these classes, why not complete the contact form? We’re looking forward to meeting you!

The development if Aikido was very multifaceted. Perhaps it would be too much to attempt to present all styles that developed. Therefore, we concentrate on the most important people for our Aikido in chronological order.

Ueshiba Morihei, later called Ō-Sensei (“great teacher”), was born in Tanabe, South Japan in 1883.Already early in his childhood he engaged intensively with the Japanese martial arts. He learned amongst others Sumō, several styles of Jūjutsu and sword- and spear-fighting.His main influence was the Daitō-ryū Aiki-jūjutsu, which he studied from 1915 on under Takeda Sōkaku. Most of the unarmed techniques of Aikido can be traced back to this system. 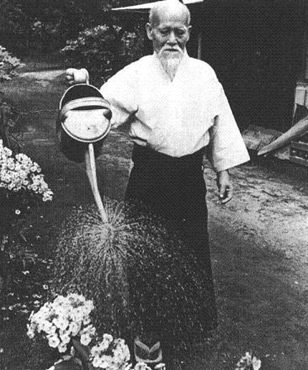 In addition to the martial arts, Ueshiba Morihei also occupied himself a lot with religious and spiritual topics. His intensive spiritual search had an immense impact on the development of Aikidō towards a pacifist martial arts. In the 1920s he began teaching his own style, calling it Aiki Bujutsu at first and Aiki Budo later on. Using his good contacts with the Japanese military and other influential people of the Japanese society, he could spread his teachings not only in Tōkyō, but soon all over Japan.

During the Second World War he realized that martial arts were being misused more and more for military purposes. Because of that, he retreated to the countryside in Iwama, north-east of Tōkyō. This was also the time, in which the name Aikidō became accepted. There, he worked on the integration of different weapons techniques and the further development of his art towards one that pursues peace and harmony in society by overcoming violence and aggression. He continued to refine Aikidō and remained an inspiration for his students who had remained in Tokyo until his death in April 1969.

Kisshōmaru Ueshiba was born in 1921 in Ayabe. He was the third son of Morihei Ueshiba. Already early in his youth he learned martial arts under the instruction of his father. During the Second World War when his father moved to Iwama, he assumed the role of head of dojo in hombu dojo, the headquarters of Aikido in Tokyo. Concurrently, he received the title of Nidai Doshu (Master of the Way) and assumed responsibility for the dissemination of Aikido.

The end of the Second World War marked the beginning of the “Golden Age” of Aikido with its international dissemination. Aikido was one of the first martial arts to be re-approved by the Allies and the Aikikai was founded as a nonprofit organization.

After the death of Ueshiba Morihei on April 26th 1969, his son took over the succession as Doshu (head) of the Aikikai. Under his auspices, the international dissemination of Aikido was pressed ahead. He arranged the worldwide dispatch of Aikido teachers. In doing so, he laid the foundation for the Aikido organizations that exist outside of Japan nowadays. Through his numerous books and publications he contributed significantly to the systematization of Aikido.

Ueshiba Kisshōmaru died in 1999 in Tokyo. It is thanks to him and his unweary work that today, Aikido is being practiced in almost all countries of the world.

After the death of Kisshomaru Doshu, the role of Doshu was assumed by his son Ueshiba Moriteru (植芝 吉祥丸, 1951~ ). He 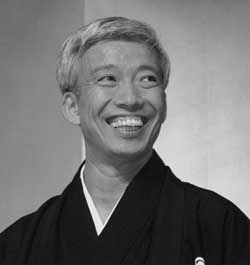 had been leading the Aikikai Hombu Dojo already for several years.

Moriteru Doshu continues the tradition of his father with his clear and powerful technique on the highest level. When he took over as head of the Aikikai, he brought with him the teaching experience of many years. The Aikido community has great hopes that Aikido will continue to thrive and prosper under his guidance.

Christian Tissier was born February 7th 1951 in Paris. He started with Aikido in 1962 under

Jean-Claude Tavernier. Very soon thereafter, he practiced with Nakazono Sensei. Since he was very earnest about practice, he received the second Dan already at age 17 in 1968. In 1969, he decided to go to Japan where he studied at the Hombu Dojo with the most prominent teachers of the time. Originally having planned to stay six months, he eventually stayed for seven years.

In Tokyo, the second Doshu and Seigo Yamaguchi turned out to become his most important teachers. Additionally, he also dabbled in Kenjutsu (sword fighting) und kick boxing. In 1976, as a fourth Dan,  Christian Tissier returned to France, where he opened his dojo in the Parisian suburb Vincennes – the Cercle Tissier. He was decisively engaged in the formation of the French Aikido federation FFAAA and has educated a multitude of its active teachers himself.

As he has stayed in touch with Japan and through his work has become the most important European Aikido teacher, he was decorated with the eighth Dan by the current Doshu Moriteru Ueshiba in January 2016. Nowadays, Christian Tissier Shihan ranks among the most renowned Aikido teachers worldwide and teaches seminars in numerous countries. He has published several books and DVDs.